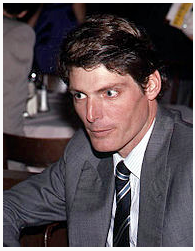 Sometimes it takes a great amount of courage to learn the lessons that life puts in front of us that enable us to grow. Many things of value can not be taught, they must be lived. Every now and then however, people come into our lives and set the ultimate example for what it means to be courageous and take responsibility.

Once in a while we are blessed to know those who set the standard for what it means to be a hero, simply by the choices they make. One such person was Christopher Reeve.

Christopher Reeve, thrown from a horse in an equestrian competition in 1995, was paralyzed from the neck down. Even though the odds were against his survival, he was determined to live and enjoy the quality of his life, thus becoming a true superhero.

On May 3, 2004, just five months before Chris passed away, I had the pleasure of meeting and talking with Chris and Dana Reeve. Chris and I were both speaking in front of a group of 5,000 Choice Hotel employees at the San Diego Convention Center. We “book ended” the event as opening and closing keynote speakers.

After my speech, I was approached by Dana. She greeted me with a hug, congratulated me on the favorable reception I had received and asked me to come back to meet Chris. She told me that when I gave my speech, she and Chris were watching my performance on a TV in the green room. Dana beamed as she told me that there were eight other people in the room with them and Chris told them all to keep quiet or please leave because he wanted to hear the end of my presentation.

“Needless to say,” she said anyway, “there was silence.” 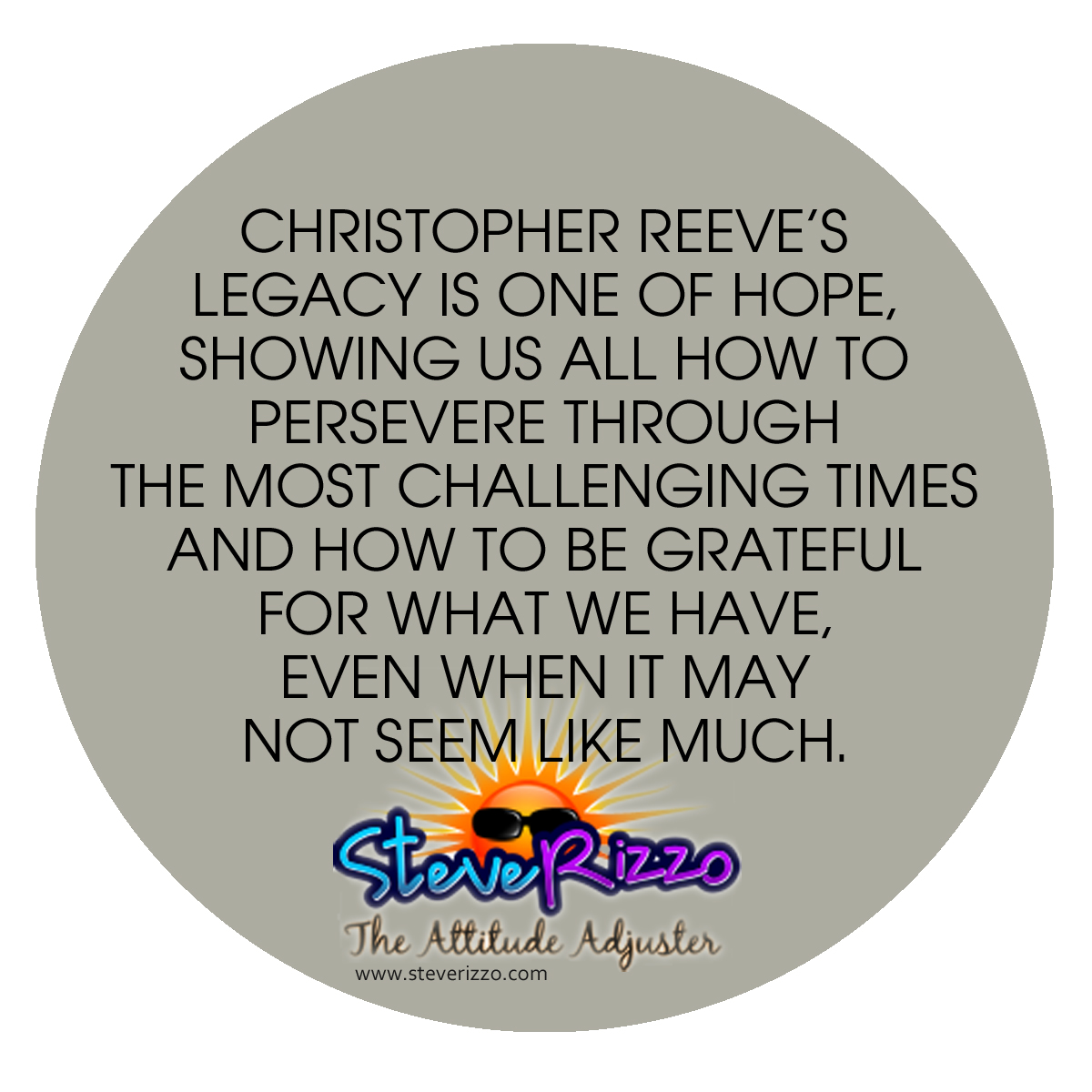 When I made it back to where Chris was waiting, he smiled and thanked me for coming back to say hello. He said that he really appreciated what I had to say, especially the part about unleashing the power of your Humor Being. “I live by that philosophy,” he said. That was the best compliment I ever received in my speaking career. Hearing it from Chris Reeve humbled me but also reinforced that what I’d been talking about all these years could actually make a difference in people’s lives.

When Reeves and I spoke he shared his philosophy of life. He told me that the power of positive thinking and a sense of humor helped him not to become paralyzed literally and figuratively by what others said he could or couldn’t do.

Many of us heard Chris proclaim to the world that one day he would walk again. This was a bold and hopeful statement and, although he failed to reach that goal, what was more important is what he did with his life with the time he had. The man in the wheelchair accomplished more in the last nine years of his life than most people do in a lifetime. He was chairman of the board of the Christopher Reeve Paralysis Foundation, Vice Chairman of the National Organization on Disability and an active lobbyist for stem cell research. He was the author of two best-selling books, Still Me and Nothing’s Impossible. He directed, produced and acted in movies. And, in his spare time, he spoke throughout the country and parts of the world on how to embrace adversity.

Setting an example of this magnificent attitude was not only a triumph for Christopher Reeve and those with spinal chord injuries, but speaks of the power of the human spirit.

Carol Ryff, Professor of Psychology at the University of Wisconsin-Madison, says this about Reeve: “There is no doubt in my mind his positive attitude extended his life, probably dramatically. The fact that it didn’t allow him to recover function of all limbs is beside the point. There is a science that is emerging that says a positive attitude isn’t just a state of mind. It is also connected to what is going on in the brain and in the body.”

There is also scientific research emerging about the enigmatic healing power of humor and the effect it has on the brain and in the body. I believe a sense of humor and a positive attitude are inextricably linked. . After all, it’s rare that you walk away from a deep, genuine laugh or even a smile and fail to feel more positively than you did before.

As Christopher Reeve told me and I later read in his book, it was partly through humor that he came to understand that his fear-based thoughts didn’t have to affect his reality. In the chapter entitled “Humor” from his book, Nothing’s Impossible, Reeves recounts the interaction between him and his nurse that let him know he was on the road to recovery.

Nurse: “How are you today?”

Reeve: “Well my throat is a little scratchy; I have an itch on my nose, and my fingernails need cutting. Oh, and I’m paralyzed.”

Jokes about the wheelchair helped to defuse his anger about being in one. When he was on The David Letterman Show, David asked him how he was doing, Christopher told him, “I’m fine, but I think I broke my neck again driving over the potholes on my way into the city.”

This type of humor helped him to adjust to his new way of living. In fact, humor was one of the things that brought some kind of normalcy and balance into his life.

“How nice it is to be teased,” said Reeve. “I love it when I approach the dinner table, which I occasionally hit as I try to park, and my son picks up his plate and says, ‘Look out for the crazy driver!’”

While trying to adjust to his new life, Reeve would often slip into what he called “the numb zone.” The numb zone, according to Reeve, is a very dangerous place to be: a gray area that is void of human emotion and life energy. It’s when you’re completely un-engaged– not depressed — but not able to generate enthusiasm either. . That’s when turning to humor can become difficult, but all the more necessary.

“Sometimes humor is hard,” Christopher said, acknowledging the difficulty in laughing when you don’t feel like it. “But it’s worth it.”

I agree: humor is worth it because it gives you the motivation and attitude to move forward. Humor shrinks negative thoughts before they blossom into full-blown emotional havoc. Had Christopher Reeve held onto the thoughts that were telling him what he couldn’t be, what he’d never be again, he would have most certainly been paralyzed mentally, emotionally and spiritually. He would have lived and we would have witnessed a totally different outcome to his situation.

When Chris was asked how he kept it together, his reply was, “Mostly with duct tape. It keeps the hose from falling off the ventilation that keeps me alive.”

It was often his quick wit that allowed him to avoid falling prey to the devastating consequences of negative thinking. His innate ability to make the shift and laugh in the face of fear is what gave this Superman, this Super-Humor-Being, the courage to carry on and accomplish so much in the last nine years of his life. It is this same attitude we all need if we are to succeed and enjoy our lives, regardless of our personal circumstances.

In 2001, Chris said, “I’m not living the life I thought I would lead, but it does have meaning and purpose. There is love, there is joy, and there is laughter.”

Christopher Reeve’s legacy is one of hope, showing us all how to persevere through the most challenging times and how to be grateful for what we have, even when it may not seem like much.