The Secret to Putting Humpty Dumpty Back Together Again 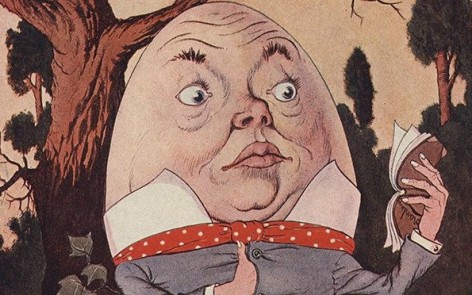 The first time I can recall my sense of humor having a dramatic effect on my life was when I was in the third grade. I was performing in our school play, Alice in Wonderland. No, I wasn’t Alice. I was Humpty Dumpty—you know, the egghead who was damaged irreparably when he found out he didn’t have worker’s compensation.

It was opening night and the auditorium was packed with parents, teachers, students and their families. Peering out from the wings of the stage I could see the rows of expectant faces. That’s a lot of pressure for a third-grader. The time for my scene came in the blink of an eye, and there I was, sitting on the wall in my egg costume. Everything was going fine until my line, “I’m one who has spoken to a king, I am!” And I guess I said it with just a little toomuch enthusiasm… because I lost my balance and fell over the back side of the wall.

All the audience could hear was a giant thud! I didn’t get hurt, but I remember how humiliated I felt waiting behind that wall for the house to realize that falling wasn’t a part of the act—at least not yet. All I could think was, I messed up big time. I was going to be the laughingstock of the entire school, and I assumed the rest of the cast would berate me for ruining the play. And how, I wondered, could I ever face my parents? I wanted to run off the stage and hide, but I was frozen by fear, crouching behind the wall—an egg with egg on his face.

While these negative thoughts were running rampant in my mind, the teacher in charge was running up the steps from the first row, calling out, “Steven, are you OK?” And instinct kicked in, to rely on the ability that had gotten me out of bad situations before: humor. Without missing a beat, I yelled out as loud as I could, “Yeah! But I think I cracked my shell. I hope Alice doesn’t mind scrambled eggs!” To my young surprise, the entire audience exploded with laughter.

Hearing the laughter, I slowly stuck my head above the wall to check out what was going on. As soon as they saw my big egghead, the laughter turned into cheers and everyone in that auditorium, including the cast, was standing and chanting, “Hump-ty! Hump-ty!” Because scrambled eggs just aren’t as good without a little ham, I jumped on top of the wall and proceeded to take many exaggerated bows.

The teacher was begging me to please sit down before I fell off again, but I couldn’t help myself. I was totally blown away by the reaction and attention I was getting. The cheers and the laughter grew louder as I took one final bow, but eventually I sat down and let the play continue—and it was a huge hit. What happened that night that allowed me to shift from embarrassing failure to incredible success? My “humor being” came to the rescue.

In a matter of seconds, there was a major shift in perspective—an emotional transformation. Just by blurting out the first obvious joke that came to my mind, I went from klutz to hero, from experiencing humiliation to becoming the show’s star. And I’m not exaggerating when I say “star.” When the play was over, I was actually signing autographs.

Every time I look back on this significant incident in my life, I am reminded of how important it is to be in control of my emotions in business and in life and how laughter can help me find control. Why? Because in addition to signaling to yourself that your problem is laughable, you’ve also stopped the rampage of negative thinking. You’ve calmed down your nervous system to the point where you can shift your thoughts and think clearly, reassess the situation, bounce back and take control.

That night as Humpty Dumpty, when I joined in with the laughter of the audience, I felt instant relief. I regained my confidence, took control and hopped right back up onto that wall. Now that’s power!

Remember, your sense of humor is your sense of perspective. It’s a choice we all have on how to deal with the insanity that life throws at us every day.

This article was also published at Success.com